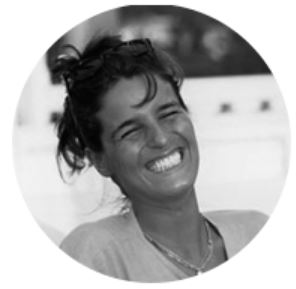 After many summers spent in their family house in Les Portes en Ré, on a French Atlantic island, Margaux and Laura, Agnès’ daughters, decided to join the important amount of kids selling pebbles, pearl necklaces and others childish creations, a tradition of this little village. This is how they started selling simple scoubidou bracelets with a metal ring. The 7 and 10 year-old girls, far too young to realize their bracelets had become a thing, had a lot of fun inventing everyday new knots, new colors and new mixes.

Everything speeded up in Paris and the anonymous jewels from the early beginnings quickly got sold at Zadig & Voltaire and got very successful. This success allowed the designer to consider her jewels as legitimate and to create her own brand, affordable in many stores in Paris and abroad. She gave birth to Gag&Lou in 2006 and associated the jewels with the new logo, a little clover, to symbolize Agnès’ ambitions.

Agnès was born in Paris. Aged 17, she discovers graphism and got into the Graphic Art Superior School « Penninghen », where she graduated.

Student of world famous artists as Roman Cieslewicz, Paul Gabor and Peter Knapp, she brilliantly succeeded her thesis and was immediately approached by several design agencies.

Agnès firstly integrated the agency Dragon Rouge then followed her path to visual identity at Architral. Her design and artistic direction talents led her to advertising, but she soon decided to create her own company, « Galliera Creations ».

She then developed her activity by creating logos, graphic identity charters, illustrations, table art collections which were noticed by French and American companies such as P.Frey and Caspari. Her designs are nowadays edited worldwide.

Passionated with new technologies, Agnès then started to turn to digital graphic expression. While continuing her activities from the beginning of her career, she innovated with a new branch of activity : graphic personalization of paintings, lamps, cushions…

In 2004, she started designing fashion accessories under the name « Gag&Lou » which edits all her references.

Initially created for Zadig & Voltaire and Paul & Joe, her collections encountered a great success. They were therefore noticed by the press which created a real emulation around the designs. Agnès’ jewels are nowadays distributed in numerous stores in Paris (Galeries Lafayette, Franck & Fils, Paul & Joe, Bathroom Graffiti…), France, Europe, and the United States (New York and Los Angeles).

All her creations are exclusive, made in France and always associated to the brand’s logo, a little clover.

Agnès was recently asked to create a cow for the Paris «  Cow Parade » in 2006. Her design was selected and she got the first price of design. Her creation was then sold at a Drouot Montaigne auction, and the 42 000€ benefits were donated for charity.&

Eclectic, passionnated, inventive and gifted with a real artistic talent in graphic arts, Agnès is only satisfied by quality.

TF1 : Gag&lou made in france

Suscribe to our newsletter !

You may unsubscribe at any moment.